Scientists in Japan have observed, and interfered with, the ultrafast motion of electron movement inside of a Xenon atom using synchrotron radiation. The ability of synchrotron radiation to observe and control such ultrafast processes could open new applications in the development of functional materials and electronic devices in the future.

Scientists in Japan have observed, and interfered with, the ultrafast motion of electron movement inside of a Xenon atom using the coherent pairs of short light waves in synchrotron radiation. Xenon, consisting of a nucleus surrounded by five nested shells containing a total of 54 electrons, is used in flash lamps, and it burns bright and fast. The luminescent electrons move there on a time scale of one billionth of a second. The fast electron movement is however six orders of magnitude slower than that the scientists observed. Using the synchrotron facility at Institute for Molecular Science, they tracked the electron movement in relaxation to shed energy by dropping from an outer shell to an inner shell. The process happens at a timescale of femtoseconds, or one millionth of a billionth of a second. A femtosecond is to a second as a second is to almost 32 million years. The ability to observe and control such ultrafast processes could open the door to next-generation experiments and applications, according to the researchers.

The results were published on March 17 in Physical Review Letters.

“Controlling and probing the electronic motion in atoms and molecules on their natural time scale of attoseconds — which are one-thousandth of a femtosecond —
is one of the frontiers in atomic physics and attosecond physics,” said paper author Tatsuo Kaneyasu, researcher at the SAGA Light Source, Kyushu Synchrotron Light Research Center in Japan. “In this study, we demonstrated that ultrashort processes in atoms and molecules can be tracked using the ultrashort property of the radiation wave packet.”

Recent advances in laser technology enable us to produce ultraquick, or ultrashort, double light pulses that can interact with subatomic processes. This interference can be controlled by precisely tuning the time between each pulse. The pulse excites electrons, the motion of which is referred to as an electron wave packet. Kaneyasu and his team have achieved this technology using synchrotron radiation which has a great advantage in generating higher energy photons than those by lasers.
“This method, termed ‘wave packet interferometry,’ is now a fundamental tool for studying and manipulating the quantum dynamics of matter,” Kaneyasu said. “In this study, the electron wave packet was produced by superimposing some electronic states in a xenon atom.”
Much like how two overlapping beams can produce a more intense light than either individually gives off, two overlapping electron wave packets produce quantum effects.
“The ultimate goal is controlling and probing the ultrafast electronic motion of a wide range of elements, not only in the gas-phase atoms and molecules but also in the condensed matters,” Kaneyasu said. “This new capability of synchrotron radiation not only helps scientists study ultrafast phenomena in atomic and molecular processes, but may also open up new applications in the development of functional materials and electronic devices in the future.”
Co-authors include Y. Hikosaka, Institute of Liberal Arts and Sciences, University of Toyama; and M. Fujimoto, H. Iwayama and M. Katoh, Institute for Molecular Science. Fujimoto and Iwayama are also affiliated with The Graduate University for Advanced Studies. Katoh is also affiliated with the Hiroshima Synchrotron Radiation Center, Hiroshima University.
The Frontier Photonic Sciences Project of National Institutes of Natural Sciences and the Japan Society for the Promotion of Science funded this work. 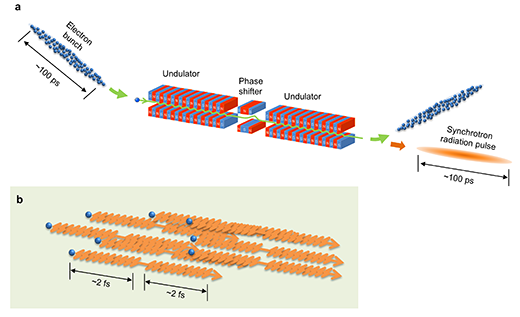 Fig. 1. (a) Schematic diagram of synchrotron radiation generation by undulators. Time widths of radiation pulses are determined by the spatial broadening of electron bunches. (b) The radiation pulse contains many short waves (wave packets) emitted by individual electrons. In the present study, two undulators are arranged in series to generate pairs of wave packets. Each wave packet oscillates only 10 times in 2 femtoseconds. Time intervals of the wave packet pairs are adjusted by detouring the electron bunches with a magnet between the two undulators.

Fig. 2. Top Panel shows fluorescence intensity from inner shell excited states of xenon atoms measured with changing time intervals of the wave packet pairs. Lower Panels show magnified views at positions a and b in top Panel. Fluctuations with a period of 63 attoseconds are observed due to the interference effect between the quantum states excited by the wave packet pairs. As the time interval between the two wave packets in a pair increases, the amplitude of the fluctuation decays due to electronic relaxation of the inner shell excited states.

Information of the paper